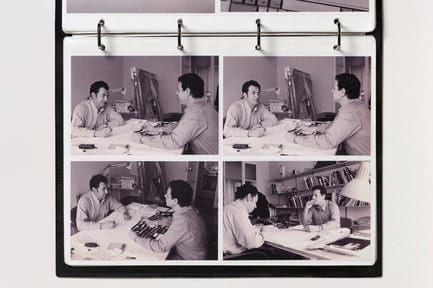 Until 13 September 2015, the CCA showcases a series of three consecutive exhibitions exploring the newly acquired archive of the Spanish architecture studio Ábalos & Herreros.


Beginning today, the Canadian Centre for Architecture (CCA) presents Out of the Box: Ábalos & Herreros. Conceived by the CCA as an innovative, ongoing investigation of an architectural archive, the three consecutive exhibitions explore the legacy of the Spanish architecture studio Ábalos & Herreros through the research and interpretations of guest curators OFFICE Kersten Geers David Van Severen (Brussels), Juan José Castellón (Zurich) and SO-IL (New York). This research and exhibition project is part of a broader strategy towards archives entitled Out of the Box, in which the CCA actively exposes its holdings to research and discovery, and unveils material to the public while the archive is

The recently acquired archive, donated by the architects Iñaki Ábalos and Juan Herreros in 2012, represents not only their built works, but also their concerns beyond the traditional mandate

of architecture which is manifest in their numerous curatorial projects, teaching activities and extensive writings. The three exhibitions will introduce new readings of the work of these contemporary architects, revealing the depth of their significance for architecture today.

Iñaki Ábalos and Juan Herreros established their office in Madrid in 1985, working together until 2008. As practicing architects, theorists and educators, they continuously opened up a new architectural discourse and defined a language that not only reflected the transformations in the political, social and economic structures of the modernising country in a post-Franco era, but that also demonstrated a growing interest in technological optimism as they entered their international phase.

The eclectic nature of their work has allowed them to expand a large vocabulary of references, building typologies and construction techniques as deployed in the Plaza Castilla Masterplan (1986-1987), the Usera Public Library (Madrid, 1994-2003), and the Recycling and Urban Waste and Recycling Plan of Valdemingómez (Madrid, 1996-1999). Their research and professional work overlapped in part with their teaching at ETSAM (Escuela Técnica Superior de Arquitectura de Madrid) and their different appointments at American universities such as Princeton, the Illinois Institute of Technology, the Harvard Graduate School of Design and the GSAPP of Columbia University in New York. Research, publications, curatorial work and professional activities were all complementary aspects of their practice. Notable examples include the 1992 publication Técnica y arquitectura en la ciudad contemporánea, 1950–1990 (translated into English in 2003 as Tower and Office) and the 2000 exhibition on Cedric Price, which was staged by Ábalos & Herreros and curated by Juan Herreros. Both architects have continued their architectural practice independently, building from the legacy of their collaboration. Juan Herreros is currently Chair Professor of Architectural Design at Madrid School of Architecture, a Full Professor at the GSAPP of Columbia University and founding partner of estudio Herreros, a Madrid-based architecture practice operating worldwide. Iñaki Ábalos is Chaired Professor at ETSAM- Spain, and Chair of the Department of Architecture of the GSD Harvard University and co-founder of Áand co-founder oe, an international architecture office settled in Madrid and Cambridge (US).

The first exhibition in the series, Industrial Architecture : Ábalos & Herreros selected by OFFICE Kersten Geers David Van Severen is on view in the CCA’s Octagonal Gallery from today

in new building techniques and mass-produced materials as means to achieve better energy efficiency, but also in the minimal architectural expression of the buildings, facades and building elements. The guest curators Kersten Geers and David Van Severen describe their work as “an exaggeration of architecture as industry, a conscious understanding of the fragile balance at the outer edge of worn-out modernism. Their modernism is reduced to a set of signifiers rescued from the debris of metropolitanism and post-formal architecture of the nineties: fucked-up pragmatism, a full economy of means.”

Included is a series of CAD drawings showing over thirty projects from the Ábalos & Herreros  digital archive, so as to foreground the contrasting spatial qualities, subtleties, and differences of the varying “industrial” schemes which range in scale and use,

from small sports – halls to skyscrapers, offices to universities. The exhibit also includes photographic slides used by the architects as referential material for their teaching, which will be displayed in a reproduction of a viewing device (tripod) referencing Ábalos & Herreros’ scenography for the Third Bienniale of Spanish Architecture (1995). To reflect on the relationship to the physical archive, the installation also features a specific photographic commission titled Proofs of Relevance by invited artist Stefano Graziani highlighting selected objects from the archive. These physical documents are captured in their archival contexts and include sets of drawings in their original folio, crated models as well as textual material such as manuscript corrections to Ábalos & Herreros’s Tower and Office and collages of the AH Houses or Tenerife (PIRS) structure. Stefano Graziani is a photographer, architect and co-founder of the architecture magazine San Rocco. He serves as a guest lecturer at the School of Architecture in Trieste.

As a result of the exhibition project, his photographic series will gifted to the CCA Collection.

OFFICE Kersten Geers David Van Severen, based in Brussels since 2006, was founded in 2002 by Kersten Geers and David Van Severen. Alongside their various realized buildings, they have produced numerous publications and installations, including the exhibition design for Imperfect Health: The Medicalization of Architecture at the CCA (2011), the Sharjah Biennale (2013), and the Silver Lion award-winning collaboration with photographer Bas Princen

They both graduated in Architecture and Urbanism at the University of Ghent (BE) and the Esquela Técnica Superior de Arquitectura in Madrid (ES). Kersten Geers worked with the architectural firms Maxwan and Neutelings Riedijk Architects. He taught at the University of Ghent, Columbia University, and the Academy of Architecture in Mendridio (CH), and is currently an associate professor at the École polytechnique fédérale de Lausanne (CH) and a visiting professor at Harvard’s Graduate School of Design. David Van Severen worked with Stéphane Beel Architects, Xavier De Geyter Architects and for Atelier Maarten Van Severen. He was a tutor and guest critic at the Academy of Amsterdam, the TU Delft and the Berlage Institute in Rotterdam, and currently teaches at the Architecture School of Versailles.

Throughout an extensive research residency in 2014, the guest curators had the opportunity

to access a range of digital and physical records ranging from architectural sketches and drawings, to collages, textual documents, photographic materials and models. As a result, they have developed singular lines of inquiry while articulating a way of reading an archive and ultimately the work of an architectural practice. Out of the Box: Ábalos & Herreros examines

the work of contemporary architects still active in the field, which allows for different research strategies: Iñaki Ábalos and Juan Herreros themselves, as subjects of study, will also play an active role as respondents to the different proposals contributing to an ongoing oral history of their own archive and a public symposium introducing the two Spanish architects to their critics scheduled for 12 September 2015.

The design of the exhibition was developed by the CCA curatorial team in collaboration with OFFICE Kersten Geers David Van Severen. The graphic design was conceived by Jonathan Hares.

The ‘Out of the Box’ initiative is part of the CCA’s long-term objective to open its archives to critical investigations through exhibitions, publications and debates at the same time as the archive is in the process of being fully catalogued.

As CCA Director Mirko Zardini explained, “It reflects the institution’s commitment to continuously approaching alternative methods of scholarly research and critical thinking for the practice of architecture while supporting the emergence of new voices in the field.”

Zardini added: “The CCA aims to foster discussion and dialogue in an international research-oriented context. This intense research activity is fueled to a great extent by our growing Collection, one of the world’s foremost holdings of publications and architectural design documentation whose guiding purpose has always been to make comprehensive and integrated bodies of material available for advanced, interdisciplinary study.” Since 2012, the CCA Collection has been enriched through several recent donations, including the Álvaro Siza fonds, the Pierre Jeanneret fonds, the Victor Prus fonds, and a major addition to the Gordon-Matta Clark archives and the Cornelia Hahn Oberlander fonds.

The CCA is an international research centre and museum founded in 1979 on the conviction that architecture is a public concern. Based on its extensive collection, the CCA is a leading voice in advancing knowledge, promoting public understanding, and widening thought and debate on architecture, its history, theory, practice and role in society today. The CCA offers a unique environment dedicated to the study and presentation of architectural thought and practice, where the work of Ábalos & Herreros can now be studied in the context of the other existing international archives of Peter Eisenman, Arthur Erickson, John Hejduk, Gordon Matta-Clark, Cedric Price, Aldo Rossi, James Stirling.

Out of the Box: Ábalos & Herreros . Installation view at the CCA.
Photo credit:
© CCA, Montréal.

Stefano Graziani, photographer. View of photomontage of a Residential prototype Vivienda AH-Gia (1993-96). Photograph commissioned by the Canadian Centre for Architecture. Gift of the artist.

Stefano Graziani, photographer. View of an annotated page of the publication Tower and Office (2002). Photograph commissioned by the Canadian Centre for Architecture. Gift of the artist.
Photo credit:
© Stefano Graziani.

Tomioka Chamber of Commerce and Industry

At Cégep Marie-Victorin, Art is an Essential Element of Education!

Conversion of the Former Hospital of Meursault