LA FIRME, in collaboration with Baillat Cardell & Fils and XYZ Technologie Culturelle, was handed the mandate to design the installation of the lounge and the space dressing of La Cinémathèque québécoise for the Rencontres internationales du Documentaire de Montréal (RIDM) 2012.


This is the second year in a row that LA FIRME, a Montreal-based design and construction company, has been chosen by the RIDM to stage this major cultural event. This year’s concept, developed by LA FIRME, relies on intricate arrangements of ropes and boxes. « In addition to illustrate a link, the rope also marks out a path.


It perfectly suits this year RIDM’s theme – Where all stories meet – and where all paths come together », says Louis Béliveau, one of LA FIRME’s designers. The ropes set up the itinerary and outline the various environments of La Cinémathèque way down the outside of the building where they wrap around a truck from which the passers-by can view in fast-forward the installation of the aforementioned lounge. The boxes, for their part, refer to the very founding of cinema where, from a little box, a magic world would come to life. Moreover, the box evokes the notion of unwrapping a gift, of discovering new ideas, new horizons… which is the true essence of the Festival.

In order to liven up the vast Norman Mclaren Hall of La Cinémathèque, LA FIRME has called on two well-known companies: Baillat Cardell & Fils and XYZ Technologie Culturelle. The first one designed the motion graphics that we can admire on a huge wall made of dismantled boxes whereas the second company was responsible for the technical aspects of the lounge installation as well as all the lighting elements. On November 17 at the closing night of the RIDM, the three firms will showcase their respective talents in a multimedia presentation that looks most promising.

LA FIRME’s reputation as a high-end design and renovation firm has been established mostly through various residential and commercial projects. Born from the encounter between artists, designers and general contractors, LA FIRME creates and carries out projects that combine mechanical and technical sophistication with refined aesthetics.

When assessing a renovation project, the energy performance of the building is of paramount importance to LA FIRME’s partners. “We’re building for the next 30, 40, 50 or 100 years. A house which is energy efficient now will yield major savings on the long term. For us, that’s a key ecological issue », explains Pierre Julien, construction project manager.

In addition to its design and building expertise, LA FIRME also creates and produces various furniture and accessories such as the “Label Chair”, the “Gas Lamp” and a most original wine rack… all of which are available on the market. While these objects reflect LA FIRME’s modern and uncluttered aesthetics, they also convey a witty and imaginative approach that makes them as unique as their owners.

Recognized for the precision, the originality and the quality of their work, LA FIRME was approached by the RIDM in 2011 to convert the lounge into a space that could accommodate during the festival a conference hall, a screening room, a dance hall and a bar.

The concept chosen for this project used huge canvases that were unfurled on the walls and on which the visitors were invited to create their own drawings using big Tangrams (Chinese puzzles made of 7 basic geometric shapes) and ink stamps. On that occasion, LA FIRME created the famous “Label Chair” which is now sold worldwide. Each chair featured the name of a movie along with the name of its director. After the final screening session of the day, viewers were invited to hang the chairs on the wall in order to free up space in the lounge.

In 2012, LA FIRME wanted to go a step further with some graphic animation, courtesy of the BAILLAT CARDELL & FILS team who really did a great job. LA FIRME also acknowledges the technical know-how of the XYZ Technologie Culturelle people who mastered all the lighting aspects of this year’s installation.

Founded in Montreal in 2006, XYZ Technologie Culturelle creates and integrates immersive environments, sophisticated audio-visual projects and scenographic installations that answer the needs of the designers, the museum curators as well as a vast array of professional creatives. For XYZ, technology must first and above all be at the service of the imagination. That’s why XYZ team, which comprises several specialities, favours a seamless approach to better tackle any project from A to Z while respecting the financial frameworks and the timelines.

At XYZ Technologie Culturelle, nothing is left to chance. All artistic, technical and logistical aspects are an integral part of the group’s expertise to help creators from here and around the world to surpass their own limits. Whether we are talking about museum exhibitions, live shows, multimedia installations, special events or projects involving advanced technology, XYZ Technologie Culturelle is the name to remember. ZYZ has put together numbers of projects in various countries such as the United States, Mexico, China, Japan, Portugal, the Dominican Republic, Cuba, Colombia, the United Arab Emirates, Saudi Arabia, Spain and Italy.
For the RIDM lounge project, XYZ provided the technical design and supervision of the installation. The lighting – a discreet but crucial staging element of the Festival – was also masterminded by XYZ Technologie Culturelle.

Founded in Montreal in spring of 2008, Baillat Cardell & fils is a design firm with multiple facets, be they symmetrical, organic or extravagant, and with unlimited content, be it printed or digital, static or dynamic, minute or unhinged.

This broad taste for design is driven by Jean-Sebastien Baillat and Guillaume Cardell, the company’s co-founders. Together, they combine their desires for a sweeping, colorful, original and striking design. Their strength consists in deploying their bottomless creativity through many mediums. Amongst these, custom stationery and printed promotional items, video animation for television or the big screen, visual installations for shows or events, as well as interactive and web creations.

Their most cherished domain: culture. From their beginning, BC&F differentiate themselves by associating with artists and cultural projects of high caliber. Of these, Ariane Moffat, DJ Sasha, Circle du Soleil, Place des Arts, the director Denis Villeneuve, the choreographer Benoît Lachambre, the photographers Leda & St-Jacques, the illustrator Lino and many others.
The studio has collaborated in the realisation of diverse projects such as the Beatles bar in Las Vegas, the 2008 VJ tour of Sasha & John Digweed, the scenography and video content of Ariane Moffat’s show, video boards of Montreal’s Place des Arts Hall, and as also been giving the opportunity to showcase video performances notably in Paris, New-York, Mexico and Geneva.

For the lounge, BC & F opted for 3D mapping, a technology they are familiar with and which they have already used. Here, for the Festival, the abstract motion graphics highlight and accentuate the edges and axes produced by the ropes and the boxes. Through subtle or hyperactive combinations of colours and movements, the whole room seems to get into motion. At the closing night of the 2012 MIDF, a VJ will be on site to animate the walls of the Norman Mclaren Hall in sync with the music.

VIDÉO OF THE INSTALLATION: 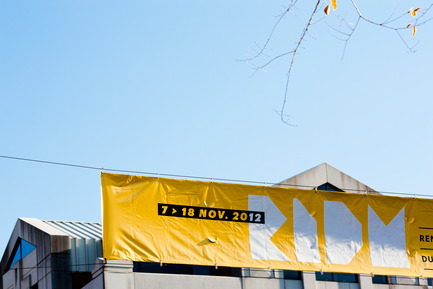 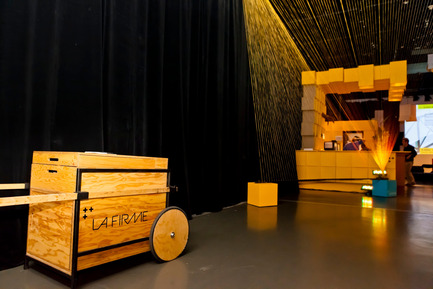 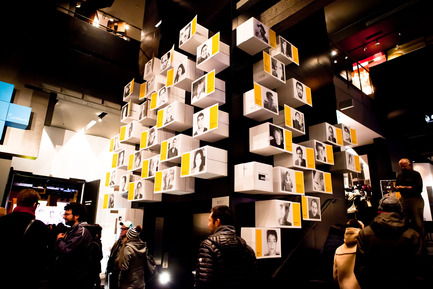 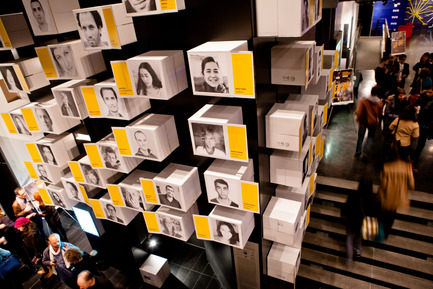 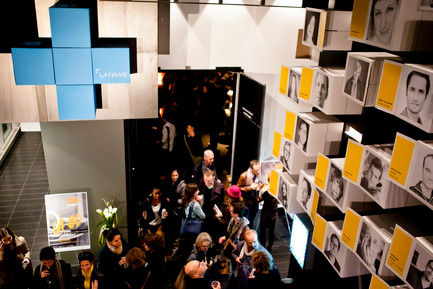 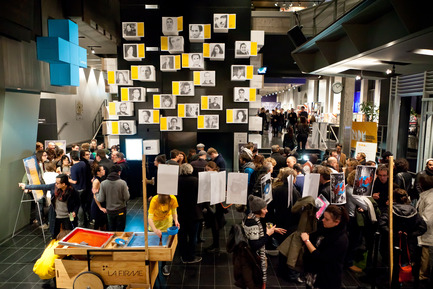 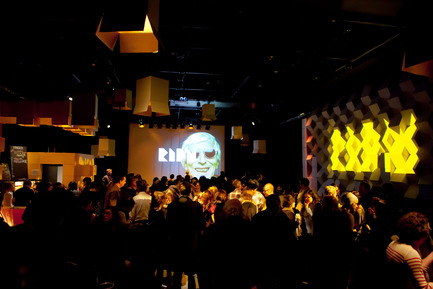 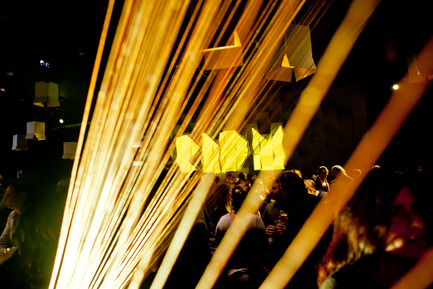 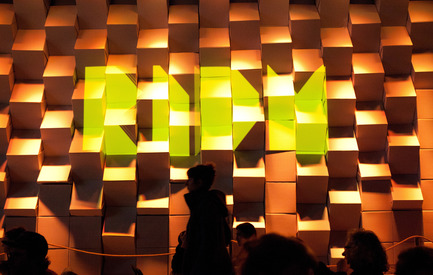 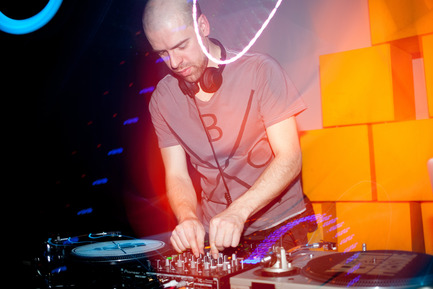 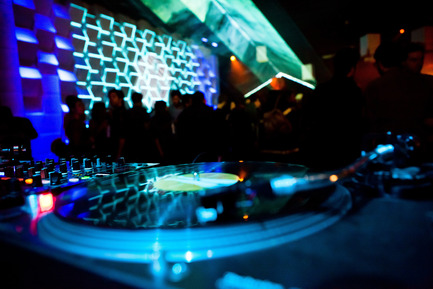 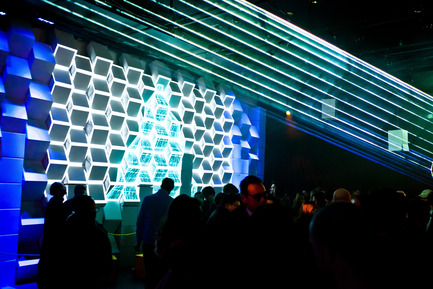 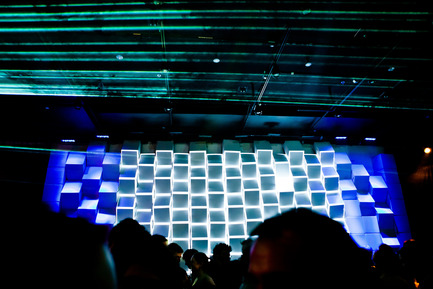 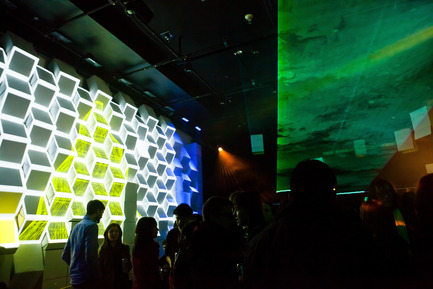 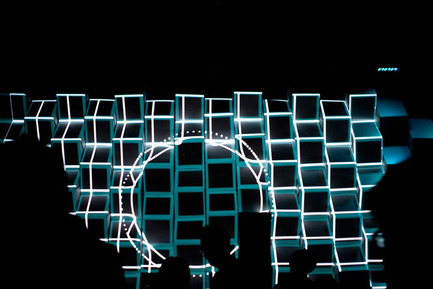 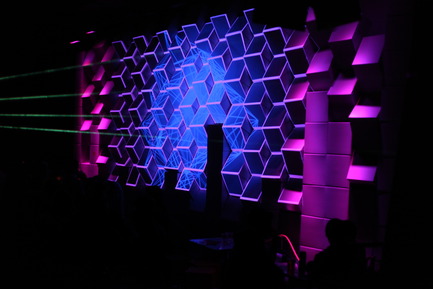