Richard Serra is one of the world’s most significant sculptors. In this video Serra presents one piece and reveals how he approaches an assignment in order to create the extraordinary experience for the viewer which is his trademark.

In this video Richard Serra presents one site-specific work made in 1986 for the Louisiana Museum of Modern Art in Denmark. Serra was invited by Knud W. Jensen (the director of the Louisiana Museum 1958-1993) to make a work at the museum and discovered a ravine which had been a part of the original topology of the land and decided that it would be a good “peek place to insert a work of mine” as Richard Serra puts it in the video.

Serra wanted “people not only see the piece from below as you walk down the path but also seeing it from the bridge as you cross the bridge. And what I wanted to happen was that when you stood in the middle of the bridge the two plates would actually close all the way. So the piece functions as a swinging door as a gate to the unfolding landscape and the sea beyond it.”

Richard Serra‘s (b 1938) sculptural works explore the exchange between artwork, site and viewer. His work has been celebrated with retrospectives at the Museum of Modern Art two times (in 1986 and 2007) and he is considered one of the most important artists of his generation.

Richard Serra was interviewed at the Gagosian Gallery in New York by Jesper Bundgaard.

Edited by Per Henriksen / Out of Sync for Louisiana Channel.

Produced by Out of Sync and Christian Lund, 2014. 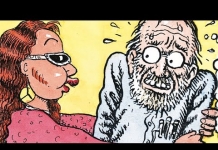 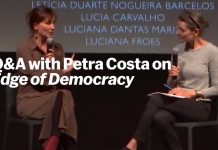 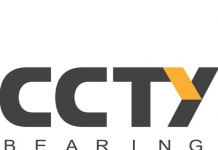