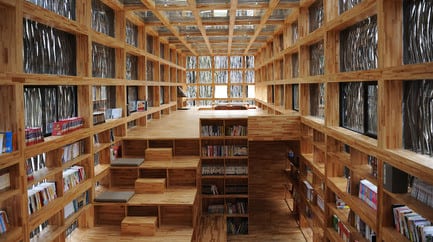 A modest library on the outskirts of Beijing, China, designed by architect Li Xiaodong, has won the inaugural Moriyama RAIC International Prize.


Distinguished Canadian architect Raymond Moriyama, FRAIC, established the prize in collaboration with the Royal Architectural Institute of Canada (RAIC) and the RAIC Foundation. It includes a monetary award of CAD$100,000 and a crystal sculpture by Canadian designer Wei Yew.

The prize was presented on Saturday evening at a gala attended by 350 guests in the new Aga Khan Museum in Toronto. One of the most generous architectural prizes in the world, the Moriyama RAIC International Prize is awarded to a building that is judged to be transformative, inspired as well as inspiring, and emblematic of the human values of respect and inclusiveness. It is open to all architects, irrespective of nationality and location. It recognizes a single work of architecture, as opposed to a life’s work, and celebrates buildings in use.

Tajikistan.  The jury was impressed by the breadth of international interest in the prize and encouraged by the high level of engagement with the aims and objectives of the program revealed in the submissions.

“They represent works across a wide spectrum of architecture around the world today – from the object building that purports to change everything and everyone it serves, to some self-effacing projects that quietly look at the world with optimism and humility,” said Barry Johns, FRAIC, Chancellor of the RAIC College of Fellows and Chair of the Jury.

The Liyuan Library opened in May 2012, in the hillside village of Jiaojiehe. “It is a lovely object in a dramatic landscape, a wondrous thing to use and be in,” the six-member jury wrote in their statement.

Architect Li Xiaodong started working with the community before funding was in place in the hopes that a well-designed library would not only improve life in the village but also boost the local economy by attracting tourists to the scenic area. The library was eventually funded by a rural-development grant from the Lu Qianshou Trust in Hong Kong. The construction budget for the 175-square-metre library was CAD$185,000.

“This project is about the relationship of a building to its surroundings and its role in serving the community, rather than a building as a discrete object,” Mr. Li wrote in his submission statement.

The jury’s deliberations went well beyond the videos and other materials included in the formal submissions. Conversations with users, research and selected site visits complemented the jury’s review of the documentation provided by the architects.  Each project was evaluated according to a set of criteria that included its formal and spatial qualities, its response to site, climate and culture, its craftsmanship, environmental design and its record of experience in use.

The jury’s emphasis on the consideration of the ‘building in use’ – not just finished but occupied for at least two years – differentiates this prize from architectural competitions that judge buildings when they are new and even unbuilt said David Covo, FRAIC, Professional Advisor to the jury.

In the two-and-a-half years of its operation, the Liyuan Library has experienced unexpected levels of use and appreciation.  A new bus stop has opened close by to accommodate the frequent visits by thousands of people, including local villagers, tourists from the Beijing urban area, and many international visitors as well.

“Everybody is free to visit. However, a book exchange system applies,” explained Mr. Li. “Visitors are encouraged to bring two books to the library, and take one back home from the collection in order to keep the place a vibrant hub of knowledge exchange.

“Instead of adding a new building in the village, we chose this site in the nearby mountains, a pleasant five-minute walk from the village centre,” he said. “In doing so, we could provide a setting for clear thoughts when one consciously takes the effort to head for the reading room.”

Mr. Li describes his practice in the following way: “What I am trying to do in my own practice might be described as reflexive regionalism,” he said. “It’s more about identifying original conditions than inventing original forms. It’s about combining technology, community, local materials, modern thinking and a traditional sense of identity.”

“We need more of these types of perhaps modest, yet powerful buildings which make architecture from a deep understanding of people, culture, context, site, materiality and light,” said Mr. Johns.

In addition to the prize, three students in Canadian architecture schools each received a CAD$5,000 BMO Financial Group Scholarship. They are Loïc Jasmin, Université de Montréal; Benny Kwok, Dalhousie University; and Shu Yin Wu, University of Waterloo. Competition entrants submitted illustrated 1,000-word essays on the topic: Why Do I Want to be an Architect.

Li Xiaodong (born 1963, China) is a practicing architect, educator and researcher on architecture.  He established Li Xiaodong Atelier in 1997, and his work ranges from interiors to architecture and urban spaces. Currently, he is chair/professor at the School of Architecture, Tsinghua University, in Beijing.

His work has won national and international design awards, including a 2010 Aga Khan Award for Architecture for Bridge School in Fujian Province, a World Architecture Festival award in 2012 for Liyuan Library, and the Architecture of Necessity Award, Sweden in 2013. Mr. Li has also received the UNESCO Jury Award for Innovation for Yuhu Elementary School. In 2011 he was named Man of the Year in China by GQ Magazine.

His publication in articles and books in both English and Chinese covers cultural studies, history and theory of architecture, and urban studies. 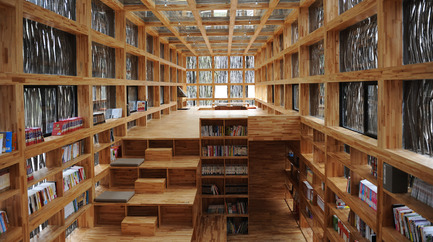 AZURE Reveals the Winners of the 2017 AZ Awards

INSIDE – World Festival of Interiors announce category winners Day One