ANALYSIS: OUR MOUNTAINS ARE CRUMBLING
Mountains are not only made of ice and rock but also of our dreams and our desires. Man has always believed that, as a witness to our birth, mountains would also be around for our departure. But for the past twenty years, the continuous thawing of the permafrost which binds the Alps together has triggered an increase in the number of landslides. 2018 was another record-breaking year with one of the hottest summers ever recorded, and as a result, the temperature of the earth has never been higher. With rising temperatures come new issues for the world’s population to tackle: unstable peaks kill tens of alpinists every year as rocky outer layers crumble away, causing landslides and the mass flooding of valleys. Thus the Alps become more and more dangerous each day. Mont Cervin is the perfect illustration of these new dangers: located at the Swiss/Italian border, this icy rock formation has been subjected to the changes in permafrost and its decay, and as a result, the countries’ border has moved over 150m in 60 years.

The thawing of permafrost has an impact of global proportions. As it thaws, the permafrost releases bio-matter which rots in the air, in turn releasing high levels of greenhouse gases.

This positive feedback cycle causes global warming. Although there’s still a lot of uncertainty surrounding the timeframe of these changes and the area they affect, it is widely admitted that climate change will be characterized by a succession extreme occurrences (including heatwaves, flooding and the like) amongst a general, global tendency for rising temperatures. It is therefore important we seek not to adapt our world to one single new climate, but to understand how we can adapt our societies to a climate set to be ever changing.

CONCEPT: CLIMATE CHANGE AS A SOURCE OF NEW SPACES
Our intention is to create a dialog by connecting increasingly intense and frequent climate variations with the fast-evolving habits of our society. To do so we studied the complexity and diversity of the unique shapes snowflakes take on as they fall.

The key defining factors of the crystal’s final shape are the temperature and humidity of the air around it. Though they all stem from the same, hexagonal base form, throughout their descent the snowflakes’ shape is defined as its surroundings evolve, leading to a surprisingly diverse set of crystals.

Positioned between two hillsides of the Mont Cervin, the Arch harnesses heavy variations in temperature and humidity to construct numerous glacial structures, thanks to an ingenious air and water circulation system. These frozen spaces’ structure and aesthetics are therefore unique, conditioning the uses they house, much as they themselves are conditioned by the climate surrounding them. As time goes by and their surroundings change, some areas will be frozen in time as others thaw and feed into newer spaces.

The result of an initiative by the Alpine Convention, the Arch is designed to re-affirm the uniqueness of an alpine zone which transcends international borders. Run by an international government organization and publicly funded, it is open day and night to visitors eager to make the space their own. Here, the concept of public, shared space is redefined by the temporality of our climate. Above all, the Arch symbolizes a rediscovered peace and unity between Man and Nature.

This work is licensed under a Creative Commons License permitting non-commercial sharing with attribution. https://creativecommons.org/licenses/by-nc-nd/4.0/ 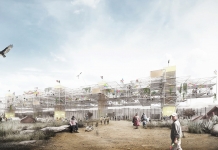