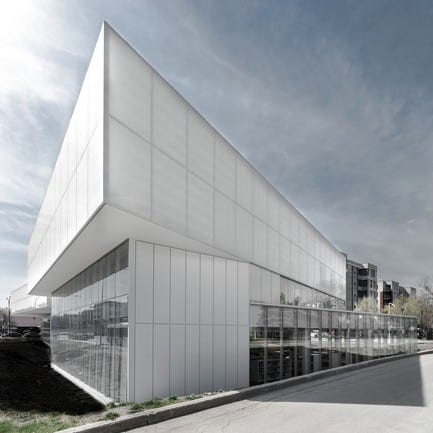 
Following an architectural competition in 2011, the firm Chevalier Morales Architectes received the mandate to expand, redesign and bring to compliance the old Lachine borough library, dating back to 1974. This neighbourhood library not meeting user and employee needs anymore, the architects Stephan Chevalier and Sergio Morales made this location a 21st century library: attractive, luminous and stimulating conversation. The project aimed for a LEED certification as well as to be an example of sustainable development principles.

Chevalier Morales Architectes imagined what the library and its neighbourhood could become, in 20 years, if the densification, greening and transportation improvement principles mentioned in the urban plan were achieved and implemented. What would happen to the library, its parking lot and Patterson Park? The firm tried to contribute to the enrichment of these principles by proposing possible solutions for the year 2031.

Imagining possible futures allowed to propose solutions and to place certain program functions that, in the long term, would reduce costs and environmental impacts while avoiding a decrease in the library’s spaces quality. For example, light inlets were strategically positioned to take into account a foreseen potential expansion. A development integrating a long term vision brings added thoroughness and relevance to the proposed design. The design approach seeks to be global and evolutionary; it proposes paths to address real societal issues instead of lingering on immediate issues. The 21st century library is imagined as a pivot for a dense and dynamic area were many mixed daily activities occur.

It was also imagined that, as an idea store, the library would benefit from neighbouring commercial space traffic by positioning itself in the residents’ daily route. The positioning of entrances to the library, with one close to the café, supports the integration of the library in the residents’ daily wandering. This café was designed to make the user’s experience complete. It is now possible to eat and drink in all areas of the library. The café’s patio extends onto the intersection. Imagining the 21st century library as a pivot for a dense and dynamic sector with many daily mixed activities appeared as highly beneficial for this current project as well as being economically viable in a long term urban planning vision.

From trading counter to loan counter

Although its purpose has quickly evolved in recent years with the arrival of new technologies and the evolution of librarian’s traditional roles, the loan counter, greatly reduced in size, remains a focal point of the library as a privileged interaction location. The loan counter being positioned on the main level, in the heart of the building to allow it to be visible from all areas, makes it possible to see the entire interior space as well. At the bottom of the gentle gradient ramp, in front of the café, close to vertical circulations and to the youth library entrance, the loan counter becomes the ensemble’s organizational pivot.   It consists of multifunctional and adapted sectors that exude an impression of accessibility and openness.

In spring 2005, Stephan Chevalier and Sergio Morales joined their strength to create the firm Chevalier Morales Architectes. Very quickly, they directed their practice towards bold residential projects, an exploration territory for their context dialogue principles and for the sensitive application of sustainable construction as well as visionary proposals for architectural competitions. The latter would turn out to be fruitful by allowing the firm to distinguish itself quickly with a formal research and a tectonic approach based on specific objectives. Their proposal in the international competition for the new Montreal Planetarium (2009) awarded them a highly noticed place as finalists. In 2011, they were laureates of two important competitions: the Maison de la littérature à Québec (House of literature in Québec) and the Saul-Bellow Library in Lachine.  They were also laureates of competitions for the Pierrefonds Library (2013) and the Drummondville Library (2014). Chevalier Morales Architectes’s achievements were the subject of many publications and awards including two (2) Awards of Excellence by the Canadian magazine Canadian Architect for the Maison de la littérature and the Pierrefonds library.

A High-End Golf Clubhouse by Architecture49