In this short and uplifting video, the influential British painter David Hockney talks about looking and painting for more than 60 years – and shares a story that made him reflect on our time.

“The world is very, very beautiful if you look at it. But most people don’t look very much. They scan the ground in front of them so they can walk, but they don’t really look at things incredibly well, with intensity. I do, and I’ve always known that.” In March 2020, Hockney sent out his iPad drawing ‘Do Remember They Can’t Cancel the Spring’ (2020) in response to the coronavirus outbreak. In this video, he shares the story of how a philosopher on a news program was asked how he could be optimistic with the current news: “And he said: Well, that’s television. Bad news sells.” The reporter then inquired what the good news was, to which the philosopher responded: “Well, the arrival of spring,” Hockney continues laughing.

In the video, you also get to experience the world premiere of an animation technique, which Hockney himself calls “time-based brush painting.”

David Hockney (b.1937) is a British painter, printmaker, photographer and stage designer, who is considered among the most influential and versatile British artists of the 20th century. Hockney is a notable contributor to the pop art movement in Britain, both in its foundation and growth, beginning with his participation in an annual exhibition called ‘Young Contemporaries’ in 1960, which also marked the start of his recognition in the art world. Hockney is the recipient of several prestigious awards including the Praemium Imperiale for Painting (1989), and the Lifetime of Artistic Excellence Award (Pratt Institute) in 2018. His work can be found in numerous collections worldwide, including National Gallery of Australia in Canberra, National Portrait Gallery and Tate Gallery in London, Museum of Modern Art and Metropolitan Museum of Art in New York, Centre Pompidou in Paris, De Young Museum in San Francisco, Louisiana Museum of Modern Art in Humlebæk, and Museum of Contemporary Art in Tokyo.

David Hockney was interviewed by Marc-Christoph Wagner at his home in France in March 2019.

Many thanks to David Hockney for providing the works and the animation shown in the video. 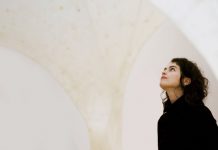