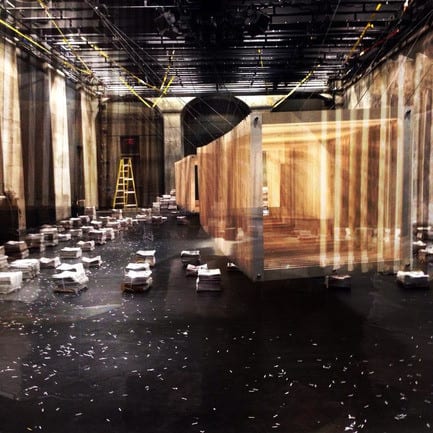 This project uses an old barracks converted into a theatre as a setting for a contemporary version of Shakespeare’s King Lear, creating a dramatic space for the actors and spectators. The idea is to create an installation modelled on the city, a 360-degree theatre.

This immersive design, this ephemeral architecture, is inspired by King Lear and his fate. Overnight, he is stripped of his power and status and left homeless – a nobody living in a nowhere, and attached to nothing. It is also inspired by the performance of the actors and in turn, influences their performance. The two drive and sustain one another. The set becomes a space-time to be inhabited.

Three worlds intermingle in this scenography created in situ, three elements define the space: an immense wooden structure, numerous stacks of newspaper, and a concrete block.  These three elements come into conflict with the light and the music and create the marketplace in which the ideas of the actors and the audience will be expressed.

In this striking theatre, the raw concrete walls are left exposed, and form part of the scenographic landscape. Contrasting with the stark brutality of these walls, the wooden structure divides the room diagonally, offering a degree of transparency and malleability. It is a conspicuously strange object, a work of art, an opening, perhaps even a passage to an imaginary world.

The wooden structure becomes at once the contents and the container. It is a walkway through the large empty rectangle of the theatre. Suspended in the air, this installation represents a nowhere land, a place that is inhospitable and perilous to traverse, two mirror-image sculptures separated by a void, a black hole which becomes the centre (of the universe) and which extends to infinity.

The 175 stacks of newspaper, reporting the city’s news, populate the space, transforming it into a labyrinth, a cemetery.  They serve both to create King Lear’s barren heath and to provide seating for the audience. The stacks are arranged in the room along a Cartesian urban grid, traversed by two storms, transforming this configuration by creating two new centres, one at either end of the room. The boundaries between the spectators and the actors become blurred.

The concrete block, of the same dimensions as the stacks of newspaper, is positioned facing the wall of the room. It is a gravestone at the centre of the universe. It becomes the counterweight to the suspended structure and the landmark of our imaginary city. The steel wires used to suspend the installation heighten the feeling of insecurity and fragility, creating a poetic image and evoking the strings of destiny, the ties between human beings, the social hygiene of the city. 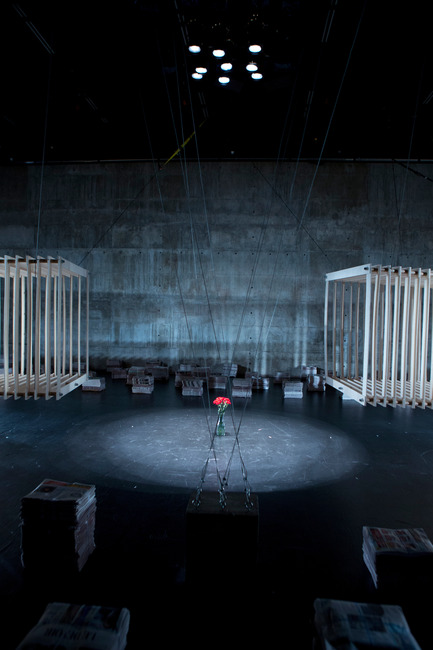 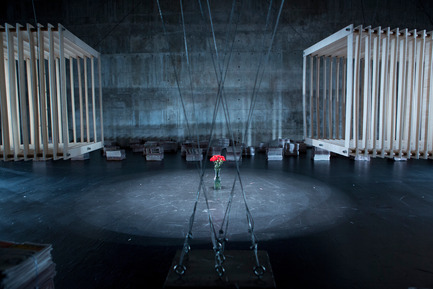 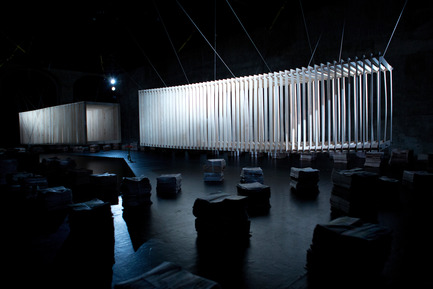 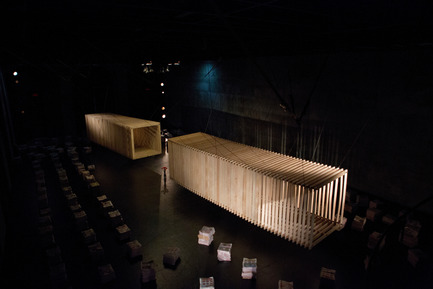 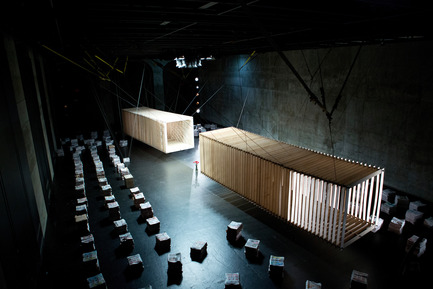 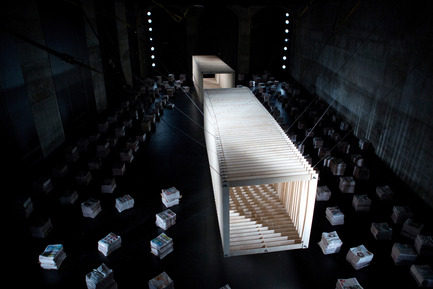 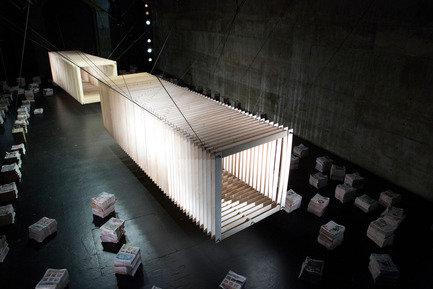 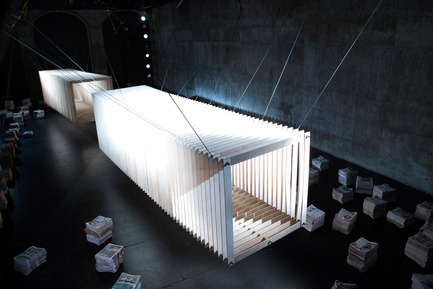 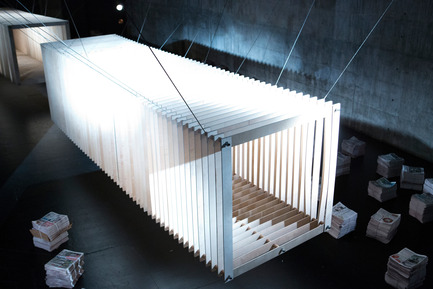 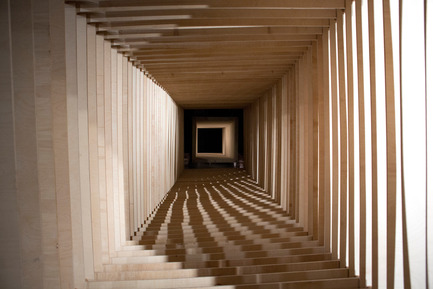 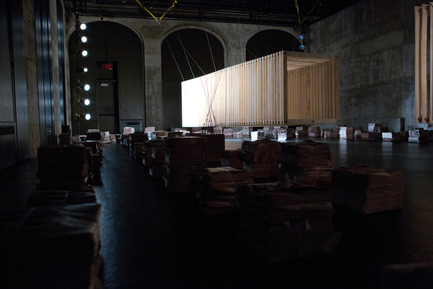 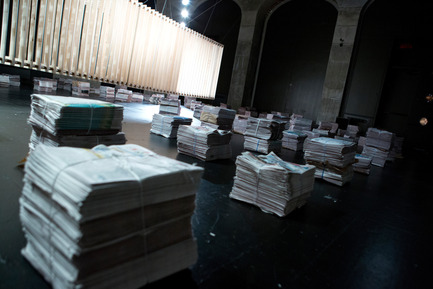 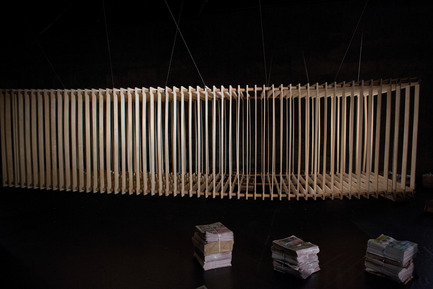 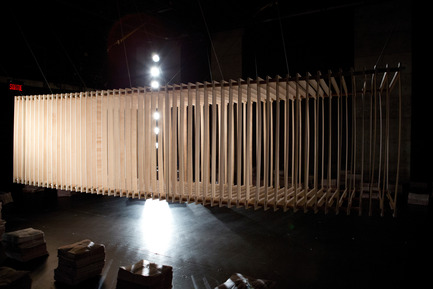 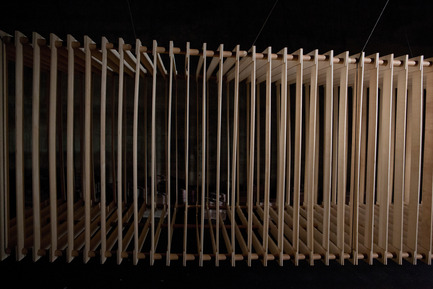 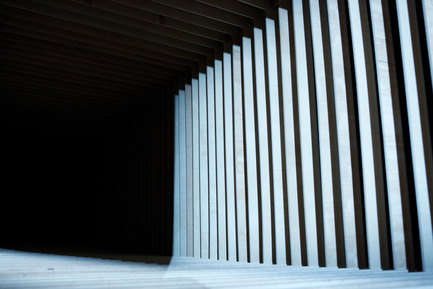