Revival of the Casino de Montréal 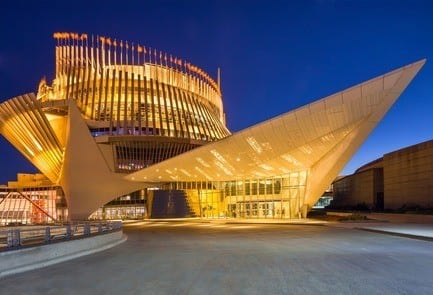 Revival of the Casino de Montréal


The consortium of MENKÈS SHOONER DAGENAIS LETOURNEUX Architectes / PROVENCHER_ROY Architectes have signed an important retrofit project of the Casino de Montréal. This project, which spread over four years, responded to the challenge of simplifying the building’s indoor and outdoor circulations, improving the quality of the gambling, recreational and dining areas as well as providing a thematic unity to the different designs. “We are proud we succeeded in finding the former Expo 67 pavilion’s character, which now makes the Casino de Montréal a gambling establishment that is unique in the world and renowned for its original character”, says Claude Provencher, Founding Partner of Provencher_Roy Architectes.


Exceptional fact, the Casino’s redesign will have led to the development of a real creative laboratory, with its own research and development budget. “The Casino was an unparalleled site of experimentation. With the help of local artisans, all the work on the space and material will have enabled us to assert the building’s unique and singular character even more,” confirms Jean-Pierre LeTourneux, Founding partner at Menkès Shooner Dagenais LeTourneux Architectes. Simplifying indoor circulations and spaces The current project will complete the work that began in 1993, during the first stage of renovations that breathed new life in the former France pavilion of the 1967 World Exposition. The design and renovations were completed in a record time of 10 months. Following its immediate success, the following and limited enlargements were undertaken for the first time in 1994, and a second time in 1996, in the building that housed the former Quebec Pavilion.

The new phase of renovations enabled a comprehensive review of the circulations and resolved some functional problems at the same time.

The architects simplified the space by focusing it around a circular hub across four levels, where the recreational areas come together (bars and lounges). The gambling areas are located around the vertical column lit by a big mesh of aluminium slats, with panoramic elevators on the south side and a staircase on the north side. The 5th floor encompasses the restaurant service, with two fast food counters (Asian and Western), a buffet and an à la carte restaurant.

To preserve the unity of the gambling area, the former administrative offices have been relocated outside the building. The multiple previous accesses have given way to a single majestic entrance, covering the reception, cloakroom and security areas. Outside, the designers streamlined automobile and pedestrian traffic that now converge to a single entry point.

A strong identity Setting up a strong identity was critical from the early stages of the project. For Yves Dagenais, Founding Partner of Menkès Shooner Dagenais LeTourneux Architectes, it was a question of finding, in collaboration with the marketing team, the Casino’s true strength of the tone, with regard not only to its position in the city but with its clientele as well. The current renovation project provides the interior space with its own personality, defined by a gaming, light and Montreal spirit theme. Each of the four gambling floors is identified by a playing card colour with the designs discreetly displayed in the perforated aluminium panels on the walls. By the same token, huge mannequins portray the effigy of a card figure (Queen of Hearts, the Joker…) that greets the visitors at the entrance of every recreational zone. Oversized tokens are hung or drawn on the ground to enhance the symbol of the game.

Light is omnipresent and is projected by the many lights as well as filtered through the backlit walls. It benefits from the permeability of the space, like the immense open palisade made of laser chiselled chrome pipes that separates the gambling areas from the recreational areas.

In turn, Montreal’s spirit is conveyed on a monumental media screen, designed by the architects and programmed by the firm Moment Factory. It spans over five floors in the middle of the building and is transformed into a permanent multimedia presentation zone. The Casino thus becomes a space to share Montreal’s culture and creativity.

A creative laboratory A rare occurrence for this type of project, the Casino’s redevelopment was transformed into a true experimental laboratory. A special research and development budget was planned to develop and test new materials, structures and lightings. This creativity was led to change the traditional perception of the space’s functionality. The walls became signs, ambient lighting and visual identity support.

The interior design team at Moureaux Hauspy, part of Provencher_Roy, collaborated on the interior redesign of the whole project, including the entrances, gambling areas, common areas and the VIP zone. It appointed the firm Blazysgerard to work on redesigning the restaurants on Level 5.

Respect for visitors and the historic site Despite the duration and the extent of the works, the operational flexibility of the teams involved in this project will have allowed the Casino to continue its operations without causing major interruptions or inconveniences to the clientele.

Moreover, the architects minimised the impact of their intervention on Expo 67’s historical site and respected the identity of the former French pavilion. For example, they used the same original architectural language to redesign the new main entrance. Plus, the new galleries housing the administrative offices were placed in a new landscaping that honours Expo 67’s former basins and watersheds.

About Menkès Shooner Dagenais LeTourneux Architectes Menkès Shooner Dagenais LeTourneux Architectes invades the city with innovative projects. With towers that outline the downtown cityscape, university pavilions that offer an outstanding setting for the future of research, and buildings that set new environmental responsibility standards, its architecture outlines the path towards change.

The firm ensures constant quality and innovation by drawing on the distinctive paths of Anik Shooner, Yves Dagenais and of Jean-Pierre LeTourneaux, united in the broader vision of responsible long-term architecture. They bring their creativity and the belief that an architectural creation is the result of coordinated actions of a whole network of players toward a common purpose.

Aware of the environmental impact of infrastructure on society, the firm has been involved for some years already with the US Green Building Council and the Quebec Chapter of the Canada Green Building Council. Its LEED-certified works include the Lassonde pavilions at École Polytechnique de Montréal (LEED Gold), the Centre for Sustainable Development (the first Platinum NC LEED-certified building in Quebec), the CHUM’s new Research Centre (LEED NC Gold) and the Bassins du Havre (LEED ND).

Urban landscape landmarks, the distinctive buildings designed by Menkès Shooner Dagenais LeTourneux Architectes create environments that are based on the quality of living areas. Among others are the Louis Bohème, a residential complex located on Place des Festivals, the symbolic YUL, a high-rise condominium building in the middle of the business district, the building located at 900 De Maisonneuve Ouest or the ÉTS student house, provide a sensitive response to the transformation of places, from which will emerge redefined, friendly, diversified and open spaces that anyone can own.

Memorable, innovative and recipients of many architecture awards, the projects Menkès Shooner Dagenais LeTourneux Architectes worked on put the user at the heart of the project and strived to offer timeless spaces.

The firm counts more than 150 passionate professionals acting in all spheres of built-environment in Canada and abroad. To date, the firm was awarded more than sixty architecture awards and mentions in Quebec, in Canada and abroad. The Montreal firm’s field of expertise thus extends beyond architecture, as the professor and former director of the School of Architecture of the Université de Montréal, Georges Adamczyk, writes, “from simple service to the search for innovation, from an overall urban plan to the detailed design of a building, from the restoration of buildings to the invention of new typologies, from partnership projects to auteur architecture, from interventions in the immediate surroundings to multinational projects.”

The value of Provencher_Roy Architectes is measured by projects like the Québec Museum of Fine Arts, Museum of Archaeology and History, the Montréal World Trade Centre, the Montréal/Pierre Elliott Trudeau International Airport facility expansions, the Canada Aviation Museum in Ottawa and the Ritz-Carlton Hotel of Montreal, the conversion of the Erskine & American Church into the Pavilion of Quebec and Canadian Art of the Montréal Museum of Fine Arts, the J.-A.-DeSève pavilion of the Université du Québec à Montréal, Life sciences complex/Bellini and cancer pavilions at McGill University, or the Biodiversity Centre of Université de Montréal.

OFFICIAL NAME OF THE PROJECT
Modernisation of the Casino of Montreal LOCATION
Montreal, Canada

Expansion of the headquarters of the Confédération des...

Veech x Veech designs one of the world’s most advanced production studios for Al Jazeera in The Shard, London